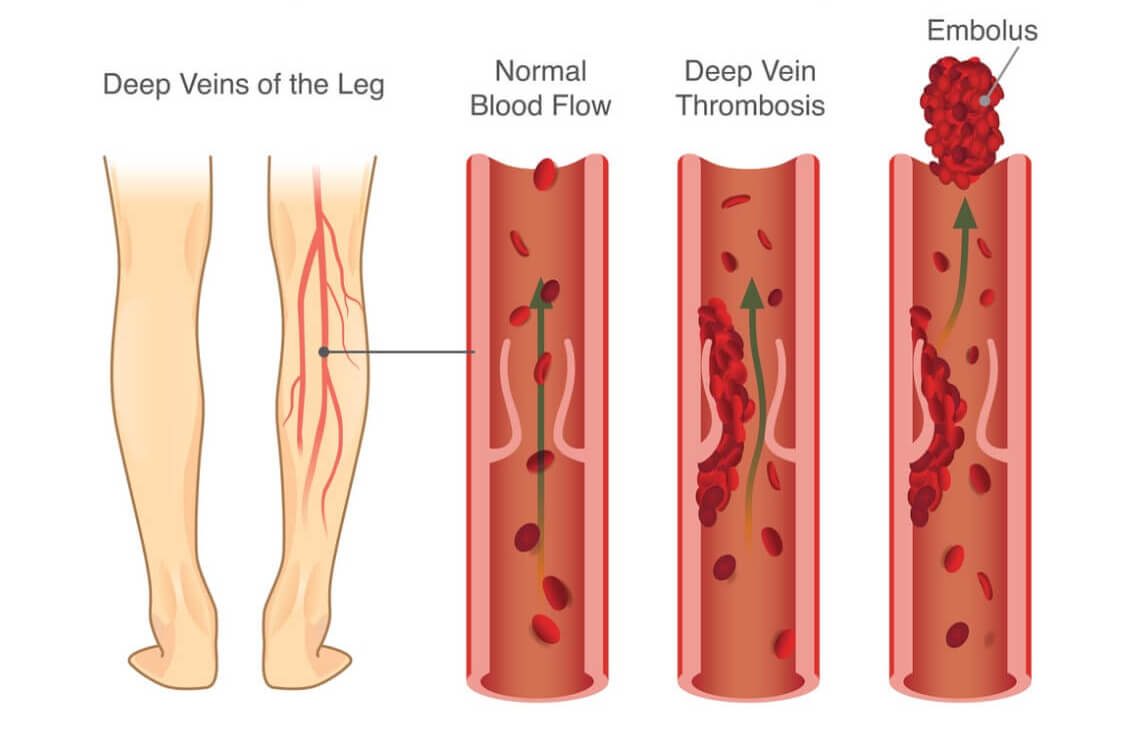 Pulmonary embolism (PE) is a condition when a blood clot that usually develops in another part of the body, most often the leg, blocks a blood vessel in the lung. PE is a life-threatening condition and recent studies have shown that 30% of untreated patients with pulmonary embolism succumb to death, in comparison to a fatality rate of 8% after timely therapy. Hence, timely diagnosis is vital as the high associated mortality and morbidity may be prevented with early treatment.

Unfortunately, the diagnosis of PE in patients can be difficult due to the wide variety of nonspecific clinical signs and symptoms. In this blog, we will explain the warning signs of Pulmonary embolism and DVT which can help you avoid a potentially life-threatening medical emergency.

Both PE and DVT are two related conditions and DVT symptoms would most likely be the first symptom of a potential PE. Diagnosing and preventing the DVT would be the best way to prevent the occurrence of Pulmonary embolism. So, what is DVT and what are the common symptoms of this condition?

DVT occurs when a blood clot develops in a deep vein inside the muscle layer. Swelling in one leg, or newly onset leg pain, reddish skin, or a feeling of warmth on one leg are the most common symptoms. Since these symptoms are not unique to this condition, doctors generally recommend an ultrasound to rule out any suspicion.

Once formed, the clot can travel to the lungs and trigger a pulmonary embolism.

Most patients feel shortness of breath as the first symptom of PE and experience a quick onset of symptoms which are relatively dramatic.

Another alarming warning sign of PE is a sharp and stabbing pain in the chest which worsens with deep breath.

It can be a quite frightening symptom of the condition and it is quite less common than the other symptoms. However, this can also happen due to other lung conditions, including lung cancer. If you notice this symptom, call your doctor right away.

Many of us would have felt dizzy or faint sometimes in our lives. Our head naturally quickly clears off the feeling and, very soon we feel normal. However, the dizziness or lightheadedness due to blood clots can lead to the patient passing out. Based on a recent study, 17 % of patients suffering from fainting spells had suffered from Pulmonary Embolism.

Most importantly, half the people who have had pulmonary embolism showed no symptoms. Hence it is quite possible that you may not know when you are experiencing the condition.

Most symptoms of PE can be confusing to the patients and doctors as many of them can be like the symptoms of a heart attack, heart failure, pneumonia, or other conditions. Once symptoms are observed, seek medical care immediately to address the underlying issues.

If you are looking for vascular experts to diagnose and treat DVT and PE, visit Avis Vascular Center. The center offers USFDA-approved minimally invasive treatment options which remove the damaged veins consequently minimizing the chances of blood clots.