DVT or Deep Vein Thrombosis refers to the formation of a blood clot in the deep veins. Also known as post thrombotic syndrome, as many as 60,000 new cases of DVT are reported every year.

In our body, the deep veins are surrounded by powerful muscles that send the deoxygenated blood back to the heart by regular contraction. These muscles help squeeze up the blood against the gravitational pull and the one-way valves of the leg veins ensure that the blood does not flow back to the feet in between the muscle contractions.

For some people, these valves do not function as desired and tend to prevent the blood from flowing back to the heart. This causes extreme blood pooling and leads to swelling thus providing an ideal setting for the formation of blood clots in the deep veins.

DVT is a serious medical ailment as any delay or lack of treatment can not only cause permanent damage to the leg but also lead to other life-threatening health conditions such as pulmonary embolism(presence of blood clot in the lungs).

Patients above the age of 40 years especially women are at a considerably higher risk for DVT. Obesity accompanied by poor eating habits and a sedentary lifestyle also increase the chances of DVT.

In some cases, DVT has also been associated with hormonal changes such as those that occur during hormone therapy, oral contraceptives, pregnancy, and post-partum. DVT is also genetic and thus the people who have a family history of blood clots must keep a close eye for any early signs and seek timely treatment.

In general, people who are employed in professions that require them to sit or stand for long durations at a stretch have also been found to be a greater risk of vascular disorders such as varicose veins and deep vein thrombosis. Other less common causes of DVT include – previous or current cancer, limb injury that leads to bed rest and thus immobility, and coagulation abnormalities. 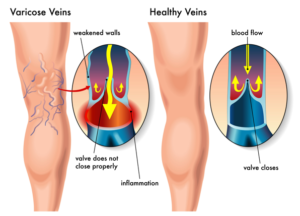 DVT can be easily recognized by its prevalent symptoms of pain in the lower leg, especially the calves. Patients may also experience tenderness in the affected area and complain of leg fatigue. The skin in the lower leg region is also usually warmer to touch.

As DVT is caused due to excessive blood pooling, there is visible swelling on the legs due to the enlarged veins. In most cases, the surface veins become clearly visible and there may also be slight skin discoloration in the affected area.

In order to diagnose deep vein thrombosis, doctors usually request for radiology scans such as X-Ray, CT scan, and MRI scan to check for the presence of blood clots in the leg veins. Some doctors may also ask for blood work to cross verify their diagnosis. Treatment for DVT is aimed at restricting the clot from growing bigger and preventing it from breaking free. If the blood clot in the deep veins breaks free, it can travel to any other body parts. The condition can get critical if this blood clot reaches the lungs and cuts off the oxygen supply to the body.

In most cases, doctors recommend blood thinners or anticoagulants that decrease the ability of the blood to clot. These may not help in removing the clot but definitely prevent it from growing in size. Doctors may also suggest compression stockings as these are known to help in restoring normal blood circulation.

However, the best solution for DVT is a non-surgical process of endovenous laser ablation. It is a painless and minimally invasive treatment that removes all damaged veins in a single sitting. The body automatically re-routes the blood to neighbouring healthier veins. This helps overcome the problem of blood pooling and prevents the formation of blood clots in the deep veins.